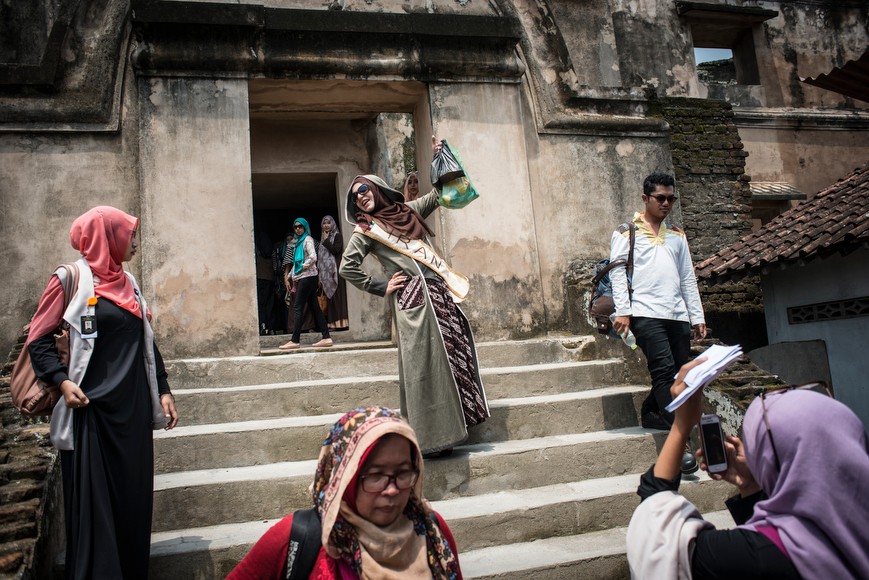 To counter the gory headlines of the recent current events in the Middle East, the photo essay on Miss Muslimah may be a relief. It's an award competition that seeks to be the opposite of a beauty pageant, and which took place in Yogakarta, Indonesia in 2014. It's for young Muslim women who are judged to have shown dedication, reputation and concern for Islamic values and community development.

With Indonesia being the world’s most populous Muslim-majority nation, the event is popular and is attracting an increasingly international lineup. Entrants from Trinidad, Nigeria, Iran, Tunisia, the United Kingdom and many Southeast Asian countries take part. 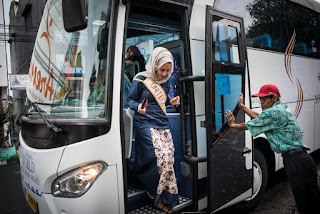 The hijab is a controversial topic amongst Muslims and non-Muslims alike. While the Qur'an requests Muslim women to dress modestly, it does not specifically institute a dress code. However, most Islamic legal systems define modest dressing as covering everything except the face and hands in public. Wives of the Prophet Muhammad are said to have been hidden behind curtains from the rest of the Muslim congregation because his home was constantly visited by people. Muslim women started then to emulate this tradition by wearing veils and face covers.

Monique Jaques is a photojournalist based in Istanbul, who spent the past four years focused on documenting issues in the Middle East as well as Afghanistan and India. She graduated from New York University's Photography and Imaging program, and was nominated for the Prix Bayeux- Calvados ‘Young Reporter’ award. Her project ‘Growing Up on The Gaza Strip’, was first published in the New York Times. She was selected as one of the recipients of the PROOF Award for the Emerging Photojournalist for her work in Post-War Libya and featured in the Bursa Photography Festival. She was also featured in the Ian Parry Scholarship show in 2009 and received an Honorable Mention for the 2008 New York Photo Awards. Her work has been published by The New York Times, The International Herald Tribune, The Christian Science Monitor, The Economist, GEO, The Guardian, and CNN, among others.
What's a "dokar" you ask?

Well, it's a two-wheeled horse-drawn cart found throughout Indonesia, usually decorated with colorful motifs and bells. Its small horses or ponies often have long tassels attached to their bridle. Typical dokars have bench seating on either side, which can comfortably fit three or four persons...and luggage (and huge bags of rice).

Regretfully, the dokars are on their way to extinction due to other more efficient and modern ways of transport. More than 200 dokars were working in Indonesia's Denpasar region, but only a handful remain these days. Denpasar -as in other large cities- experiences an uncontrolled population causing chronic traffic jams that make it difficult for the dokar to work effectively. Cheaper motorcycles have also made the dokar obsolete.

Chris McGrath has documented these last remaining vehicles in his The Vanishing Dokar in lovely monochrome tones, along with copious information about the photographs as captions.

Chris McGrath is an Australian photographer with Getty Images, specializing in editorial and commercial assignments. He has photographed, four Olympic games, the Paralympics, Commonwealth games, the FIFA World Cup, the Rugby World Cup, the MLB World Series, the Super Bowl, the Daytona 500, US Open Golf, numerous US Open and Australian Open Grand Slams, the 2004 Asian Tsunami, the election of Barack Obama and the earthquake and Tsunami in Japan and the London 2012 Olympics.

He has worked for clients such as Nike, NFL, Coca-Cola, the LPGA, NASCAR and the New York Times, and his images appeared in Stern, Newsweek, Time, Sports Illustrated, The Independent, The New York Times, The Los Angeles Times, USA Today, ESPN the magazine, The Guardian, L'Equipe and on daily news and sport websites worldwide.
He currently works in Tokyo, Japan.
Here's another series of wonderful photographs by the talented Miguel Ángel Sánchez.

Not only are they wonderful, but they depict one of the most oppressed people in the world, living under a dreadful occupation for over 60 years, as beautiful human beings by borrowing the techniques of the Old Masters....perhaps Caravaggio.

Miguel Ángel Sánchez is a Spanish photographer based in Cairo since 2009, where he opened his own photography studio. Cairo is the base where he works and prepares projects developed in Egypt during the past 5 years.
He is also an itinerant photographer who takes his workspace to many corners of the world: Asia, Middle East or black Africa. He covered the war against Gaddafi in Libya, documented the Ulu Pamir in Turkish Kurdistan, the Gaza Strip and Lebanon.

His work has been published in media such as El País, The New York Times, Le Monde, New Yorker, Photo Raw, La Lettre de la Photographie, and many others.
While this post features Miguel's portraits of Palestinians, don't miss his gorgeous portraits of the Ulu Pamir people in Turkey.

The new work by my very favorite photographer Sebastião Salgado was featured by The Guardian newspaper in the UK. It's been trending very heavily on Facebook and on Twitter, which is not surprising since so many people admire him and his work.

I not only admire his work, but his way of seeing....as he describes it by saying " If you take a picture of a human that does not make him noble, there is no reason to take this picture. That is my way of seeing things."

But back to his new work.

Mr Salgado's Genesis project is now complete after 30 trips made over 8 years. The project portrays the beauty and the majesty of regions still in a pristine condition, areas where landscapes and wildlife are still unspoiled, places where human communities continue to live according to their ancient culture and traditions.

From The Guardian's very interesting accompanying article,   Mr Salgado's latest trip was to the nomadic Nenets of northern Siberia. The Nenets are also known as Samoyeds, and are an indigenous people in northern arctic Russia. There are 40,000 Nenets in the Russian Federation, most of them living in the Yamalo-Nenets Autonomous Okrug and Nenets Autonomous Okrug.

The Nenets' lives are defined by reindeer, which are the source of their food, clothing and transport. Every spring, the Nenets move large herds of reindeer from winter pastures on the Russian mainland, travelling more than 1,000 kilometers north to summer pastures in the Arctic Circle.

I ought to also mention that London's Natural History Museum is scheduling an exhibition of Genesis on 11 April - 8 September 2013. There is no way that I will miss it...no way. 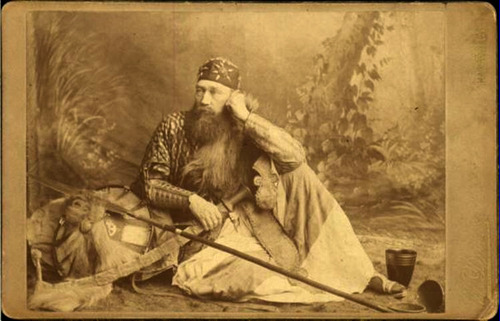 Why would I mention Bonhams, an auction house, on The Travel Photographer's blog?

Well, it's because Bonhams is holding an auction of a rare photographic album of 180 Ethiopian images by Julia Margaret Cameron, Felice Beato and others. These images include a number of self portraits of Captain Tristram Charles Sawyer Speedy(1836-1910), a well-known English explorer and adventurer during the Victorian era, who was also known by his Amharic name 'Báshá Félíka'.

He was a fascinating character who was an Indiana Jones of his time, with a long association with India, Ethiopia and Sudan.

Born in Meerut (India), Captain Speedy was a red-haired bearded man 6'5" tall, who learned to speak Amharic, adopted Ethiopian native dress, and was photographed by Cameron in various guises such as a Bedouin chief, a Nubian chief, a Nubian warrior and much more. He was the inspiration for a number of popular books.

I am enormously interested in news like that because it merges history, Africa, Asia, adventurism, exploration and photography. Despite my abhorrence of colonialism, I consider men such as Richard Francis Burton and now, Tristram, as quintessential eccentric explorers, as orientalists and ethnologists, and as remarkable linguists with an extraordinary knowledge of languages and cultures.
They just don't make men that way anymore.

For those who don't know Julia Margaret Cameron: she was a British photographer born in Calcutta, known for her portraits of celebrities of the time. Her photographic career was short, spanning eleven years of her life (1864–1875), and got her first camera when she was 48 as a gift from her daughter.

As for Felice Beato (1832-1909), he was an Italian–British photographer, and one of the first people to take photographs in East Asia and one of the first war photographers. His work provides images of such events as the Indian Rebellion of 1857 and the Second Opium War.
Karl Doyle's Nomadic Worlds Series is the type and the quality of work you don't want to miss, especially if -like me- you're interested in ethnography and ethno-photography.
Karl Doyle is originally from Ireland, and relocated to London working with many visual artists. He traveled to Mongolia on the Trans-Mongolian Express train from Beijing to Ulan Bator, and spent weeks on horseback to capture the true essence of the Mongolian nomads.
In this Nomadic Worlds gallery, he merges the Mongolian Nomads, and the Harajuku Girls of Tokyo and New York’s stylized sub-cultures into one continuing series...to highlight the diversity of their environment.
For larger projects, Karl uses a Sinar 4x5 for studio/interior settings, and a Wista for outside work.
It's not the first time that I post about David Lazar's excellent work on The Travel Photographer's blog. Far from it. But he has just revamped his website, and it has vastly improved the layout of his many collections.

He suggested that I feature his new Kenya gallery which he titled Wildlife & Warriors which has photographs of Masai tribal people, but since I have recently had a post about the Masai, I thought I'd choose his South Asia Collection gallery to headline this post instead.

David is a travel photographer and musician from Brisbane, who is drawn to locations with rich cultural backgrounds, and is especially interested in portrait and landscape photography. His work is frequently published in photography and travel magazines, and in 2012 he won the Travel category in the Smithsonian Photography Competition.

He has been travelling annually since 2004, the year in which he became interested in travel photography.

No two ways about it....this is travel photography in the very sense of the word!
Older Posts Home
Subscribe to: Posts ( Atom )